Super Meat Boy is on a region-free physical cart for the Nintendo Switch. 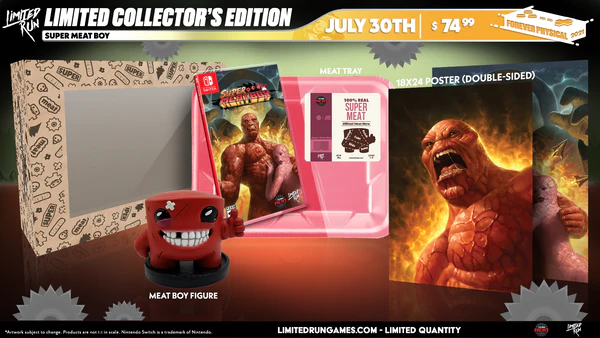 Our meaty hero will leap from walls, over seas of buzz saws, through crumbling caves and pools of old needles. Sacrificing his own well being to save his damsel in distress. Super Meat Boy brings the old school difficulty of classic titles and stream lines them down to the essential no BS straight forward twitch reflex platforming.

Ramping up in difficulty from hard to soul crushing SMB will drag Meat boy though haunted hospitals, salt factories and even hell itself. And if 300+ single player levels weren't enough SMB also throws in epic boss fights, tons of unlockable secrets, warp zones and hidden characters.

And now coming first to Nintendo Switch™ is a brand new way to play Super Meat Boy with your friends. Introducing "RACE MODE"! In this 2 player split screen race, friends (or enemies) can compete against each other through individual chapters, randomized levels, or the entire game! Choose light world, dark world, or both and have at it. Side effects may include: elevated heartbeat, severe anxiety, hubris, and schadenfreude.