Shovel Knight: Treasure Trove Outer Box is an empty hard shell box that allows you to neatly house all 4 Shovel Knight vinyl sets in one place, with a brand new commemorative illustration by Hitoshi Ariga.

This is an open pre-order for a limited time. 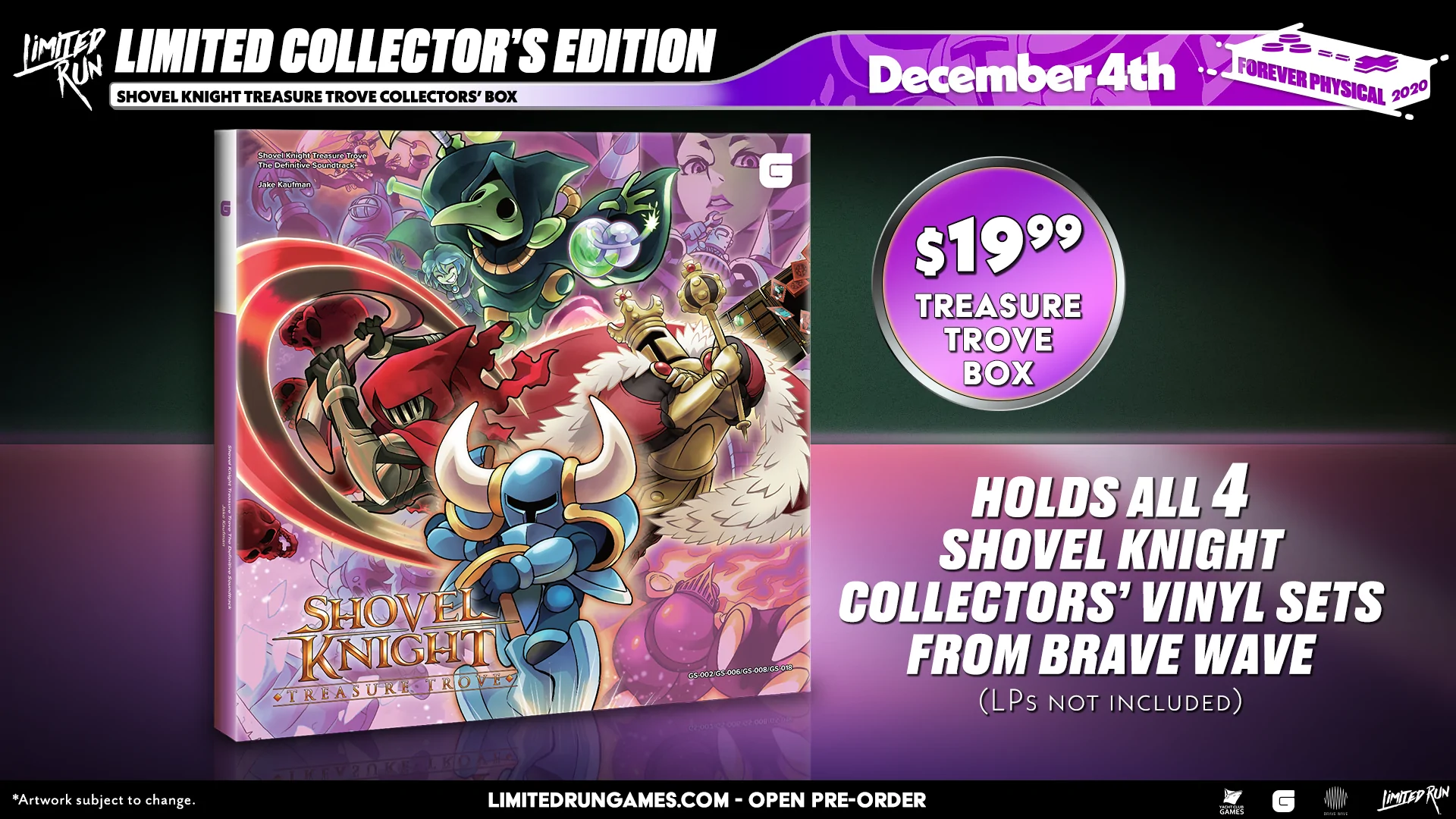 Shovel Knight: Treasure Trove Outer Box is an empty hard shell box that allows you to neatly house all 4 Shovel Knight vinyl sets in one place, with a brand new commemorative illustration by Hitoshi Ariga. Does not include any vinyl.

Shovel Knight: Treasure Trove is the full and complete edition of Shovel Knight, a sweeping classic action-adventure game series with awesome gameplay, memorable characters, and an 8-bit retro aesthetic! Run, jump, and battle as Shovel Knight, wielder of the Shovel Blade, in a quest for his lost beloved. Take down the nefarious knights of the Order of No Quarter and confront their menacing leader, The Enchantress.

Shovel Knight: Shovel of Hope – Steel your Shovel Blade and start digging through the adventure that started it all! Jump, battle foes, and discover treasures as you quest to defeat the Order of No Quarter and their vile leader, The Enchantress.

Shovel Knight: Plague of Shadows – Prime your potions and become the maniacal alchemist Plague Knight in his adventure to brew the ultimate potion! Combine bomb parts to create custom combinations, discover new items, areas and bosses, and maybe even discover a bubbling romance.

Shovel Knight: Specter of Torment – Summon your scythe in the prequel to Shovel Knight! Take control of Specter Knight to dash through completely redesigned levels by climbing walls, mastering a new arsenal of weapons, and slashing your foes to ribbons. Become the reaper, discover your melancholy past, and recruit the Order of No Quarter!

Shovel Knight: King of Cards - Step into the gilded boots of King Knight in the biggest and most regal Shovel Knight game of them all! Leap, Shoulder Bash, gather new subjects, and strategize your way through this prequel in your quest to become King of Cards!

Shovel Knight Showdown - Duel with up to 4 players locally and scramble after gems, or take control of your favorite character and dig into Story Mode! Master every move, explore a vast array of items and locales, and discover new revelations in this platform fighting game.