$64.99
This product is sold out!
This item has not gone on sale yet. It will be available on Tuesday, October 11th at 12PM Eastern Time.

Journey with a crew of half-zombie girls as you crawl through dungeons, beating up twisted creatures that were born from the fall of society in fast-paced turn-based RPG combat, and ultimately deliver the only known cure for what ails your party members to a place where it can be mass produced! Undead Darlings ~no cure for love~ is on a region-free physical cart for the Nintendo Switch. This is an open pre-order for a limited time. 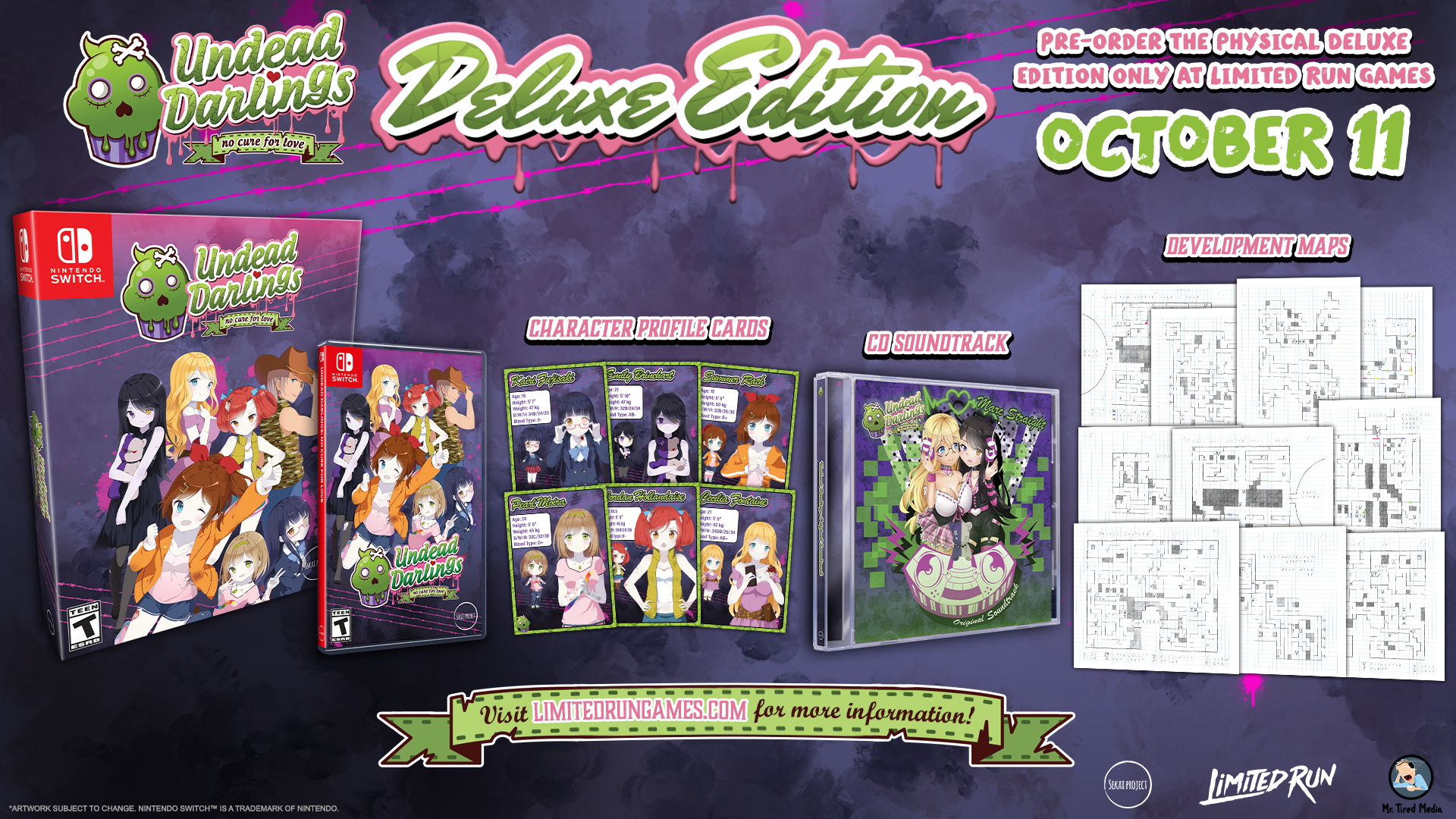 This is not a numbered release, and thus is not a part of the Limited Run Games Collection. We are distributing this title on behalf of Sekai Games. Missing out on this release will not compromise a complete Limited Run set.

What is Undead Darlings?

Journey with a crew of half-zombie girls as you crawl through dungeons, beating up twisted creatures that were born from the fall of society in fast-paced turn-based RPG combat, and ultimately deliver the only known cure for what ails your party members to a place where it can be mass produced!

Story driven portions of the game contain a multitude of branching dialogue paths that, based on the choices you make, gives deeper insight into the different characters, while the RPG portion of the game uses a familiar but refined turn-based battle system with unique twists. Both of these gameplay features are contained within a first-person perspective dungeon crawler with dungeons built like mazes and filled with traps and hidden paths.

Reginald "Reggie" P. Happenstahnce wakes up from an alcohol-related coma (courtesy of his own father, no less) by his childhood friend, Pearl, and is told that society had crumbled due to a virus outbreak that turned most everyone into zombies while he was sleeping. This includes Pearl herself. However, Pearl has managed to hold onto her human conscience, and she relates that she is not the only one in a similar state. As with every half-zombie Reggie will run into, she may be undead, but her heart is still human.

Your role as Reggie is to be the girls’ loot donkey and carry the things they find in dungeons. Since Reggie is a human, the girls will prevent him from getting infected by fighting in the front lines! Go them!

While on this adventure, you will learn more about the undead girls' lives from before the outbreak, but whose tale you will hear is based on the choices you make during the visual novel scenes. Perhaps one of them will connect with you, open up about their hardships, and maybe even develop romantic feelings... The ultimate result of these interactions will determine whether or not any of these girls trust you enough to take the biggest risk of their undead lives—volunteer to be the first test subject for your father's cure!